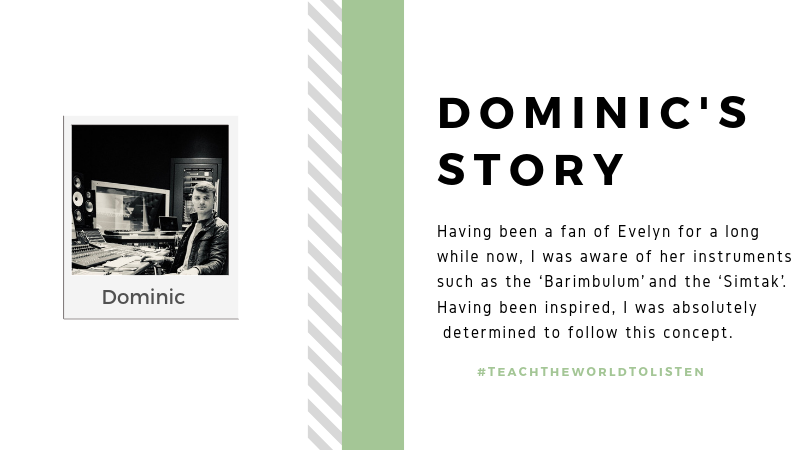 A few days ago Dominic demonstrated to us his prototype design for an acoustic finger drum kit called the Domindrum. Dominic has kindly shared his story behind the creation of the Domindrum to share on our blog:

“The Domindrum was created for a 2nd Year module as part of my Music Production degree that I’m currently doing at the University of Winchester. They had given us the rather generic brief of creating a ‘non-linear’ sound experience. I.e., it there is no pre formed path from beginning to end of the experience. I found inspiration through novelty finger drums; sometimes found on desks at work. It seemed like a good challenge to scale this concept up in size and to make it a largely acoustic instrument.

Having been a fan of Evelyn for a long while now, I was aware of her instruments such as the Barimbulum and the Simtak. Having been inspired, I was absolutely determined to follow this concept.

The Domindrum has a range of components. The frame itself is made from pine; which to me, feels solid. The keys and mallet mechanisms are also wooden. There are also two brass bars supporting these mechanisms in place. The drums themselves are an assortment of various tins we found around my house. The cymbals however, are actually finger cymbals. For a start, the bass drum, floor and mid-tom have piezo pickup microphones in them; meaning the sounds can be adjusted to my preference. These three drums produce a large amount of bass when put through EQ treatment; particularly the bass drum itself. I find the cymbals and two non-treated tins to be a good sound also. The cymbals all possess a bell-like quality; whereas both tins produce a more unique sound than originally intended.

The main challenge with this project was mounting the first drum and making the first key mechanism. However it did get easier once we got more into the project. Overall, the Domindrum took around 50-60 hours to make; as well as about 2 days to design. In fact, it was actually made in my garage at home!”

If you have a story to tell us about the influence Evelyn has had on you, we would love to hear it! Feel free to email it in to pr@evelyn.co.uk and if you wish for it to be on our blog, do let us know. Together, let’s #TeachTheWorldToListen.