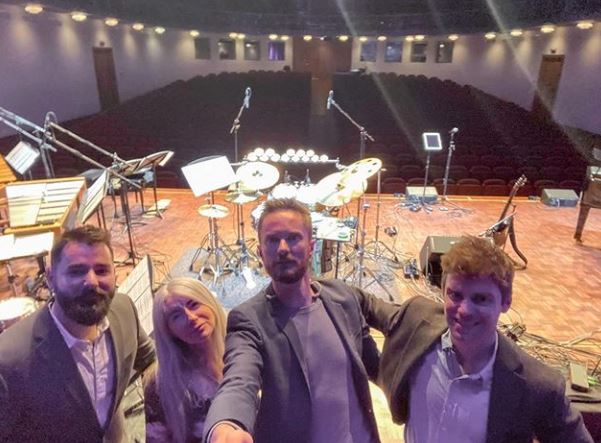 Most people who listen to jazz have probably heard lots of standard songs, ie those classics that were often written many decades ago and have been played by countless musicians ever since. But they probably haven’t heard standards as Scottish Trio HLK interpret them, and the keyword here is just “interpreter”. The group completely deconstructs the songs, analyzes their smallest constituents, and then builds something completely unique where it is only occasionally possible to recognize small fragments of what the origin was.

When the trio merges with the iconic percussionist Evelyn Glennie, another dimension is added. Glennie is the one who created the role of percussion soloist in art music, and over the years, composers all over the world have composed hundreds of works specifically for her. But she does not settle for staying in concert halls and symphony orchestras, but has collaborated with everyone from Björk to free-improv musicians. For Glennie, everything is instrumental, and she occasionally posts videos where she improvises with the same sense of discovery and empathy, whether it is on “real” instruments such as the whirlpool drum or the sink at home in the kitchen.

Their version of Wayne Shorter’s ESP begins with a vibraphone that rings for so long that it never gets silent, but remains as a mat for several minutes and almost creates a round in the ears. All of a sudden it is interrupted by Ant Law thumping out a rock-hard riff on his eight-string electric guitar and drummer Rich Kass hanging on.

What most clearly reveals that the classic Blue in green is the origin of another piece is that the stage bathes in beautiful blue light while the fund drapery gets a warm green color. Here, Glennie switches between the vibraphone and two orchestral tunes, but throughout the concert, she never plays a single hit on the tunes but simply uses them as large resonant bodies. On top of one of the skins she has placed a number of small upside-down cymbals and on the other a frame drum, a couple of mini-timbales and other drums, and these she plays with great intensity.

Jazz may thus be somewhere in the bottom, but the music gets rather features of, among other things, progrock and metal, with countless advanced rhythms, hard riffs, and lots of unexpected turns. During a solo piece, Rich Kass plays the Cuban clave rhythm with both hands and feet – in four different tempos. At the same time.

The cymbal and guitar shortage in a song based on Bach’s cello suite makes me think of the metal band Meshuggah, which is known for its hyper-exacting rhythms and was early on using just eight-string guitars to get a really bold sound. And quite rightly, afterwards Ant Law takes the opportunity to pay tribute to them.

However, it is also offered at some quieter moments. The concert will be started by Trio HLK with a song completely distant, with melodic playing on both piano and guitar, which turns out to be written by Jerome Kern. Consequently, in the second set, Evelyn Glennie has to start herself, with a piece for the melodic metal instrument halo and a recorded piano part, which basically consists of only two fast bass tones per beat, and “which goes at four-tempo, for the sake of rarity tonight” as she happily points out.

This concert gives us both an extremely playful and unique trio and one of the world’s foremost and most versatile instrumentalists, but it is not really the complexity or unpredictability that is at the center here but simply really good and exciting music. It only takes on its own expression.

This is a rough translation. Read original review here