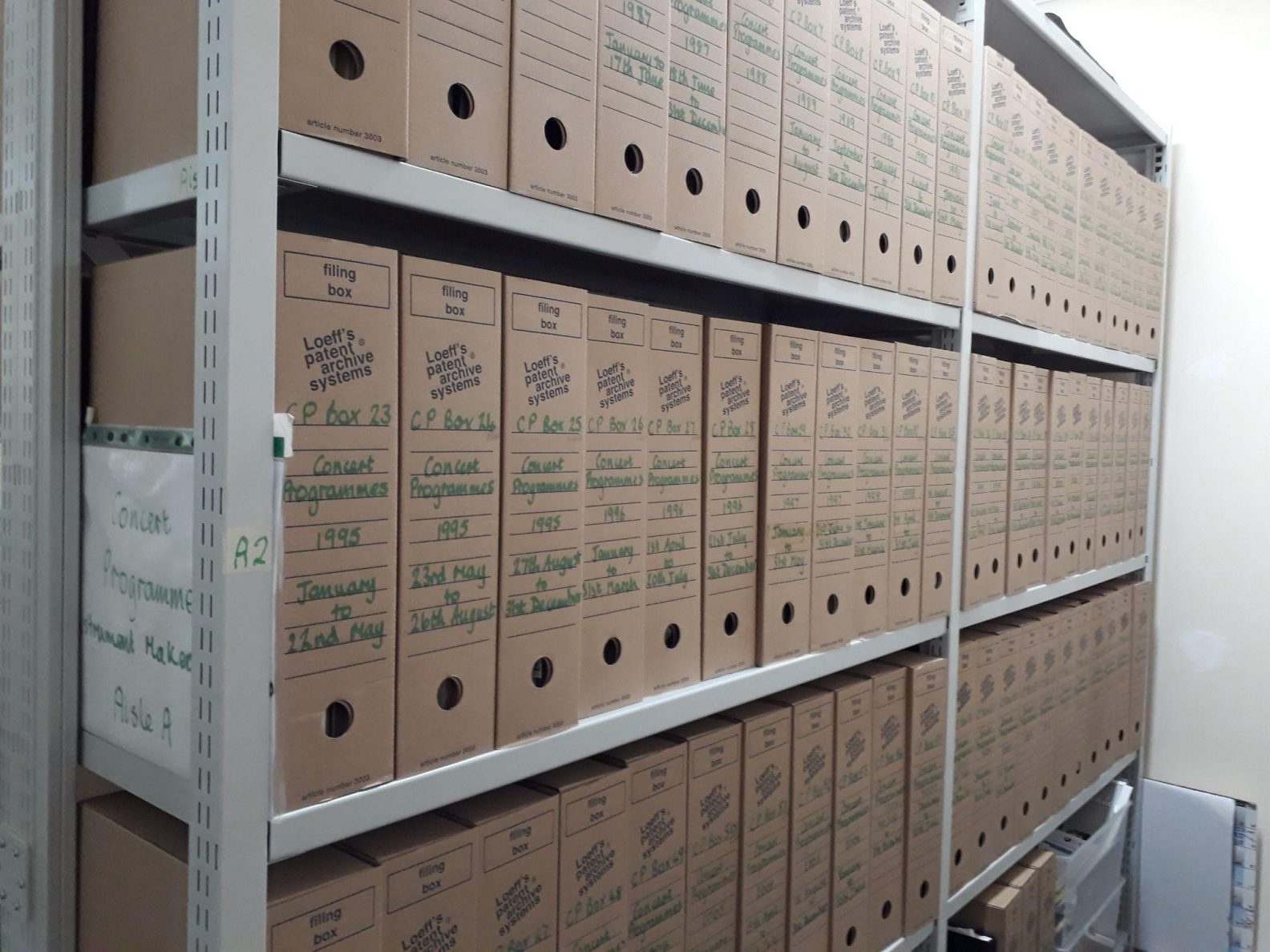 Volunteers change the world in so many different and positive ways. They can be the shakers of the world. Over the past 6 years I have been blessed with a truly amazing group of volunteers from different walks of life who have dedicated themselves towards the formation of The Evelyn Glennie Collection. The following blog has been written by Caroline Thompson who was our first volunteer to join my team. The fact that she has with-stood mountains of boxes full of artefacts of all descriptions to forming an incredibly organized, accessible and professional Collection is testament to her devotion in making this a living, global Collection for all to access.

In 2016, when I started volunteering my brief was just that – brief. Evelyn and her office staff had taken advice from various local museums, all of whom made it clear that each item in The Collection needed its own unique reference number and should have its own entry on a spreadsheet. There was a draft set of headings but there were just too many different sorts of items for any spreadsheet to be manageable and meaningful. What worked for awards did not work for publications, and what worked for recordings did not work for correspondence and so on.

Naturally it proved to be not quite simple.

Firstly, the programmes were in masses of boxes mixed up with newspaper cuttings, admin documents, photos and even some awards, including more than 20 honorary degree certificates.

Secondly, it soon became obvious that the concert programmes were not the most reliable source of information. It is amazing how often a programme does not say what the venue is, or where it is with sufficient detail. I remember spending ages wondering how she could be doing concerts in two different continents on consecutive days before realising that the one in Perth was not in Scotland, it was in Australia, then like pieces of a jigsaw slotting into place it all made sense.

Thirdly, at the start Evelyn’s career she was not able to transport her own instruments around and so was dependent on the concert organisers providing a proportion of what she would require for the chosen repertoire. However if you arrive expecting a 5 octave marimba and find a 2 and a half octave glockenspiel you have to make changes to what you are going to play. Even when she had got her trusty van there was no guarantee that the 5 octave marimba would get up the stairs and around tight corners to the stage. For these reasons the printed repertoire in the concert programmes was not always what actually happened. To make our records as accurate as possible I crossed-referenced the printed repertoire with the handwritten notes Evelyn made in her diaries to itemise the pieces she really did play.

After a year or so, from a cluttered jumble of boxes and drawers, we had a series of files of concert programmes in chronological order with a spreadsheet to match. On a day to day basis, we were beginning to map out the details of Evelyn’s performances and events.

At this point, I was getting increasingly concerned that we needed serious advice as to the best way to proceed. Evelyn’s office staff arranged for us to visit the British Library. Amongst the things I learnt there was how to preserve the items. So now, in 2022, each concert programme is in its own acid free plastic bag which is labelled with its unique reference number and stored on acid free boxes in a designated room.

To date, we have sorted identified and catalogued 1,333 concert programmes, plus 988 concert publicity items such as brochures, leaflets and posters. As you can imagine they vary hugely from:

The Last Night of the Proms at the Royal Albert Hall, London, where Evelyn was the first and only (to date) solo percussionist to be the featured soloist…

…to school concerts whilst Evelyn was a pupil at Ellon Academy, Aberdeen, Scotland. Already she had begun to arrange and transcribe pieces for the Xylophone.

From the Sydney Opera House…

…to the Tomb of the Kings, East Jerusalem.

And from the Hollywood Bowl…

…to HM Prison Craiginches (and many others!)

Whilst sorting through, I would come across links between particular programmes that made a story. Those of you who have followed Evelyn’s remarkable career will be aware that in 2000 she and Lesley Garrett recorded an album together. Here they are at Whitfield Street Studios and alongside is the CD signed by Lesley.

But did you also know that their first engagement together was while Evelyn was still at the Royal Academy of Music? At that time, students would take the opportunity to work with orchestras and amateur choirs. Here is one such occasion, note who the soprano is and who is playing the timpani in the orchestra!

There is one programme that remains my personal favourite. It is of a concert in Cowdray Hall, Aberdeen in 1974 when Evelyn was just 8 years old. As far as our records show, it is the first time that Evelyn played a solo in a public concert. The reason she was picked as a soloist? She was the highest marked Grade 1 piano candidate in Aberdeenshire.

Written by Caroline Thompson, March 2022 and published with her kind permission

Although we have concert programmes and details for many of the events Evelyn has taken part in, we know that there a few gaps, and there may be some events which we do not have any details for at all.

If you, or someone you know, happen to have any programmes or artefacts that you would like to donate for inclusion in The Evelyn Glennie Collection, please get in touch with us via admin@evelyn.co.uk or visit our Contact Us page.