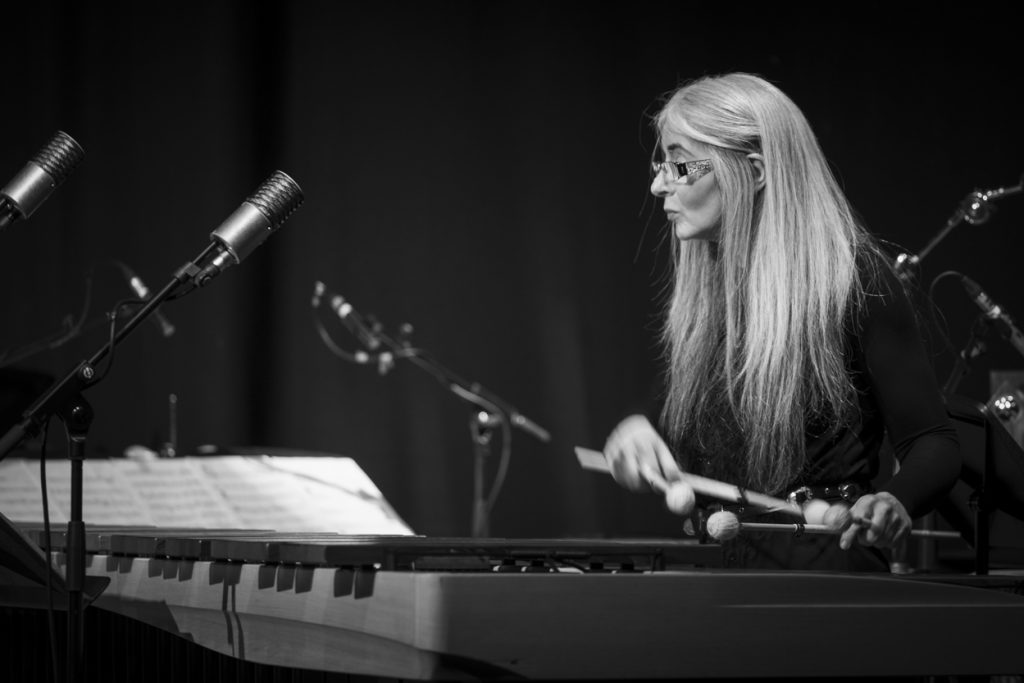 The sense of excitement is palpable as Scottish Trio HLK arrive briskly on stage at 8pm sharp, and persists undimmed until they take their modest final bows to the thrilled home crowd precisely two hours later. Such exactitude regarding time feels in keeping with a band whose music is predicated upon unrelenting changes particularly in time signature and tempo, a stuttering, gleeful symphony of polyrhythms and harmonic complexity.

This is the trio’s debut album launch gig in Scotland, the English launch having taken place last March over a three day residency at London’s Ronnie Scott’s. Much of the album, aptly named ‘Standard Time’ issued by Ubuntu Music, is aired tonight. Led by evolved composer and classical pianist Rich Harrold, with widely respected 8- string electric guitarist Ant Law and drumming wizard Rich Kass, the trio are joined tonight by pre-eminent Scottish classical percussionist, Dame Evelyn Glennie. Renowned US jazz alto saxophonist Steve Lehman, the second guest on the album, is not joining the trio on the current tour, yet it is a compliment to a young jazz trio that it can attract collaborators of the stature of Glennie and Lehman.

The gig begins tonight with ‘Twilt’, Trio HLK’s version of the lovely Fields Kern jazz standard, ‘The Way You Look Tonight’. From the outset it is clear that the compositions, penned by Harrold with the drum parts by Kass, would be the stars of the evening. With unrelenting intensity and ever – shifting harmony and especially rhythmicity, the piece starts from a wisp of the jazz standard melody, whereupon almost immediately heads for outer space. Harrold’s deconstructions and reconstructions via lovely, delicate piano melody, with Kass’ complex polyrhythms, juxtapose beautifully with Law’s splendid, harsh barks on guitar. The ever changing dense complexity and energy of the music sets the brain juices flooding, as if there has been an inspired fusion of Bang on a Can with Trio VD (and what could be better than that!)

From the second number onwards Glennie joins in on most pieces, mostly on marimba and vibraphone. Although not essential to the overall sound, her deft command of the mallets and warm personality are as ever appreciated by a welcoming audience, some of whom may have attended tonight expecting to hear Glennie play her customary 4/4 rhythm, but in the company of Trio HLK are seeing her in a whole new light! A bonus following the Interval is Glennie’s solo on halo drum, a type of hang drum, the limited number of pitches available made up for by co-composer Philip Sheppard’s backing tape, the halo’s appealing timbre and Glennie’s swift attack. 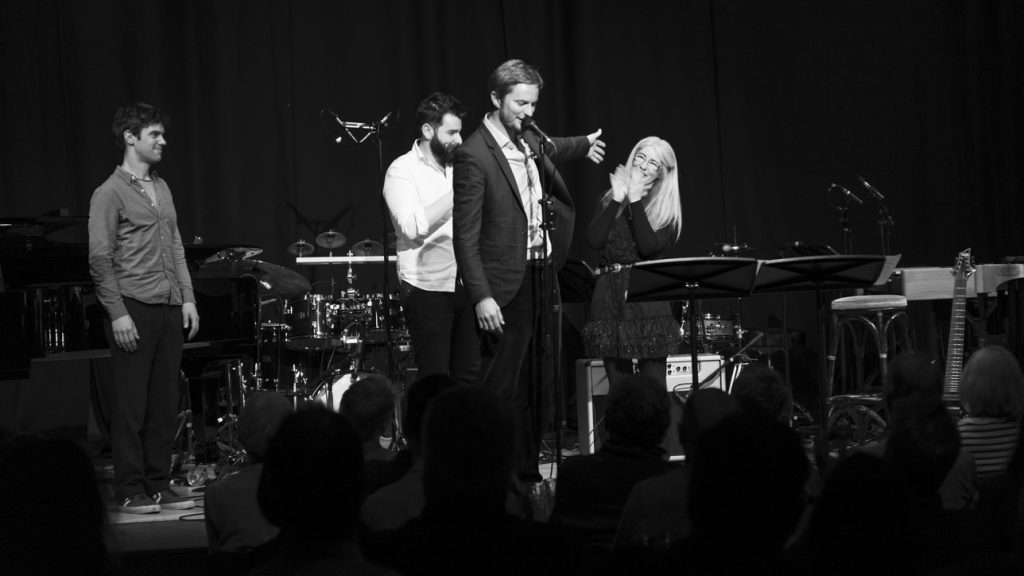 However the trio’s level of musicianship is equally impressive. Clearly they are no strangers to the art of improvisation, although tonight there is limited time for this. Guitarist Law is well known to UK audiences from his work with the likes of Tim Garland and Ivo Neame, his mesmerizing, high-speed solos such as in HLK’s version of ‘Anthropology’, showing an already highly developed jazz talent, whilst his rock star-style guitar feedback squalls in Harrold’s ‘The Jig’ (based on a gigue from a Bach cello suite) bring grins to many a face.

Meanwhile Edinburgh-based Kass proves beyond doubt that he is a drumming phenomenon, contributing a muscular, almost punk quality, whilst also demonstrating an astonishing accomplishment in thrilling, brain-trashing polyrhythm, his extended solo during one of the few fully original pieces, ‘Dux’, showcasing this. (Kass’ thoughtful arrangement of Gyorgy Ligeti’s ‘Hungarian Rock’ on YouTube is an example of his rather awesome technique.)

As for band leader and composer-pianist Harrold, his gently self-effacing style fits well with the whole, tethering the sound, preventing it from rocketing too far from terra firma and allowing him to direct these most intricate of compositions.

This is a five-star performance of intelligent and unusual music. Whilst Glennie has long been an established name world-wide especially in classical music circles, Trio HLK has an innovative, highly accomplished and genuinely interesting sound which deserves just as wide a public, and which will appeal as much to forward-thinking followers of neo-classical as it will to lovers of questing jazz.