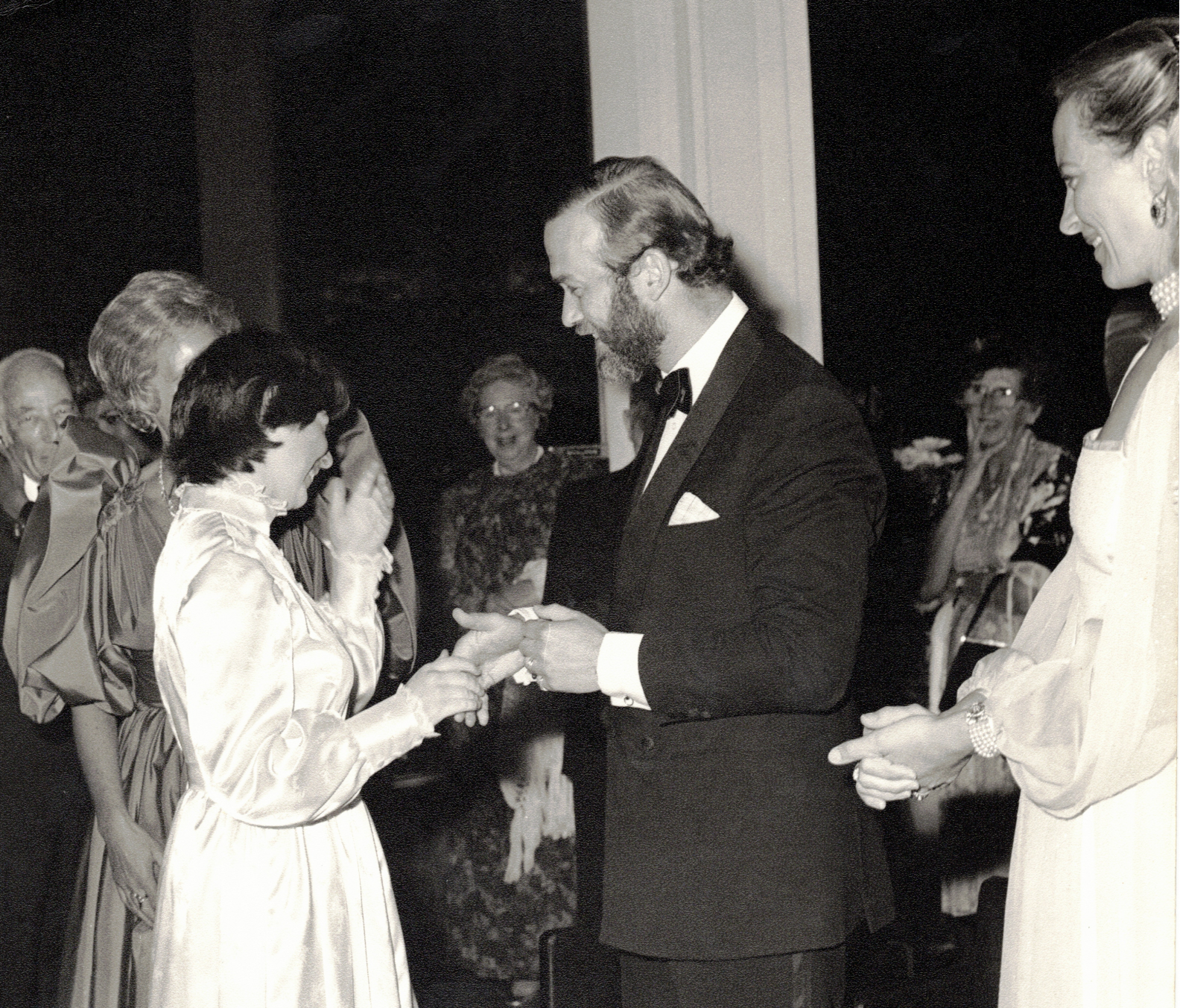 Main picture: Evelyn meeting their Royal Highnesses the Prince and Princess Michael of Kent at the Royal Festival Hall, London, in June 1982, aged 16.
Evelyn’s dress was made by Mrs Florence Cadger, a family friend.

Becoming a volunteer for The Evelyn Glennie Collection was a complete change for me. Responding to an advert in a local newspaper which said “seeking people to help with organizing all the accumulated items of a lifelong career so far”, sounded like a challenge to say the least! Little did I know how complicated, challenging and ultimately fascinating my involvement would become.

On day one, as I openly admitted my lack of musical knowledge (looking at a music score was a complete foreign language to me), we concluded that it would be a good idea for me to concentrate and collate what seemed like never-ending boxes and folders of photographs, photo albums, hundreds of magazines and leaflets which had built up over the years.

Starting with the photos was a challenge. Very few had dates or pertinent details, and so I had to rely on fashion and hairstyles of the time period in order to differentiate them. I spent several weeks literally sitting on the floor, with photos spread all around me, under marimbas, gongs and bells in order to at least get the photos into ‘decades’ as a starting point!

All the photos told a story, from school performances, student years through to beginning the career as the first full-time solo percussionist to finding somewhere to practice!

There were umpteen photos of percussion instruments including experimental items such as pots, pans and various kitchen implements.

Evelyn’s many travels throughout the world, with the enormous amount of luggage, is summed up beautifully in this photo:

There were many photos of rehearsals/performances, charitable and educational appearances, as well as hundreds of promotional photos taken throughout Evelyn’s career.

Starting to work on the boxes containing magazines was a great help as I was able to compare images from the publications with photos I had already seen. I was able to recognize outfits and hairstyles, cross-referencing them on the spreadsheets and confirming details. It did feel like spinning plates at times! Also, as I had access to years’ worth of diaries, dates and time periods began to fall in to place.

I spent many days reading through all the magazines and leaflets Evelyn had collected. I really began focusing on the name ‘Evelyn Glennie’ and could spot it a mile off …..and still can! Many of the interviews were asking similar questions about her background and career, with some stand out quotes giving an early insight into how she envisaged her future as a solo percussionist.

One example was the Radio Times in 1985 for which Evelyn states:

“All I want is to be heard, to be judged on my ability like any other musician”.

In 1994 the interviewer from Home & Country Magazine states: “In a few short years, she has brought percussion from the back of the orchestra to centre stage”.

Every now and then little gems would emerge, one being from the December 1993 issue of Country Life Magazine fashion section whereby Evelyn is discussing the do’s and don’ts of what to wear as a solo percussionist:

“I avoid zips since one broke dramatically while I was in mid flourish. The dress stayed up but I had to walk off stage sideways with the orchestra laughing their heads off”!

You can just picture the scene!

It has been and continues to be a privilege to be involved in The Collection and to play a part in its future. It has also been fascinating to see Evelyn’s journey from so many angles through the timeline and to know it will be accessible for all to access for generations to come.

Written by Amanda Roberts, May 2022 and published with her kind permission

Lastly, a plea! If you, or someone you know, happen to have any programmes or artefacts that you would like to donate for inclusion in The Evelyn Glennie Collection, please get in touch with us via admin@evelyn.co.uk or visit our Contact Us page. Thank you.