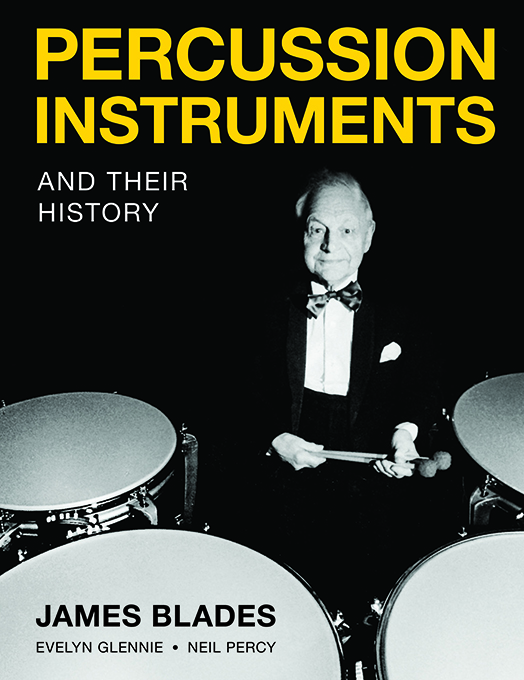 PERCUSSION INSTRUMENTS AND THEIR HISTORY

With additional chapters by Evelyn Glennie and Neil Percy

An enlarged edition of Blades’ definitive guide to the percussion instruments from around the world and their uses.

James Blades was a legend among instrumentalists of the twentieth century. Through his performance and exploration of the possibilities of percussion and the sounds that could be produced on these instruments, he changed forever the way percussion was perceived. Through his inspired teaching at the Royal Academy of Music he influenced a whole generation and those that were to come. His Percussion Instruments and their History is still rightly regarded as the standard reference work on the subject.

This extended edition includes two important new chapters. The first covers the rise of the solo percussionist and is written by the world’s leading practitioner and one of Blades’ former pupils, Dame Evelyn Glennie, who also contributes a new Foreword, while recent developments in orchestral percussion are covered by Neil Percy, Head of Timpani and Percussion at the Royal Academy of Music and Principal Percussionist of the London Symphony Orchestra.

Praise for Percussion Instruments and their History:

“This extraordinary scholarly publication has been the “get to” source for many of us over the years and, for me personally, still remains as a vital tool for my exploration of percussion.”

“Mr Blades has managed to work in a truly encyclopedic number of allusions to this or that effect, this and that composer, work and trick….”

“Mr Blades, the scholar, yields partial place to Mr Blades the performer for an enormous and exemplary chapter on the percussionist’s art….”

“The book’s lavish photographs and drawings are an endless source of pleasure….”

James Blades was the outstanding percussionist for the English Chamber Orchestra and taught at the Royal Academy of Music where his students included Simon Rattle, Ray Cooper, Carl Palmer and Evelyn Glennie.

Dame Evelyn Glennie is the world’s premier solo percussionist, performing worldwide with the greatest orchestras, conductors and artists. Her solo recordings exceed 40 CDs and are as diverse as her career on-stage. A double GRAMMY award winner and BAFTA nominee, Evelyn is also a composer for film, theatre and television. Evelyn is currently forming The Evelyn Glennie Collection with a vision to open a centre that embodies her mission to Teach the World to Listen.

Percussion Instruments and their History

Percussion Instruments and their history by James Blades, Evelyn Glennie and Neil Percy

James Blades’ famous book has been referred to as the ‘percussionist’s bible’. It is established as the definitive reference work on the subject. This extended edition includes two additional chapters by leading solo percussionist, Dame Evelyn Glennie, and by Neil Percy, Head of Timpani and Percussion at the Royal Academy of Music.