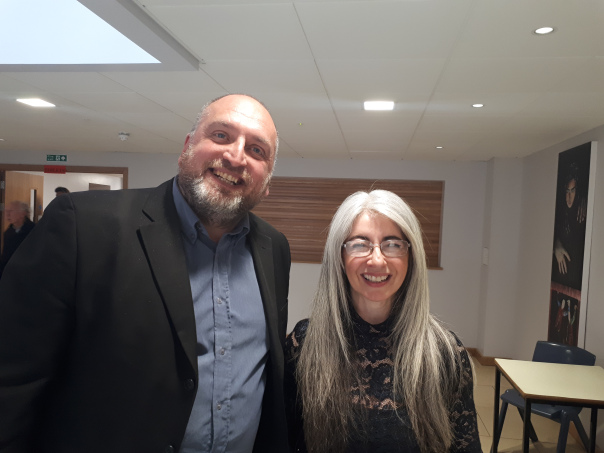 On the 14th of April 2019, Evelyn travelled down to Eastbourne College Theatre for an In Conversation. The below was kindly written by Darren Johnson:

“Last Sunday I was privileged to host an afternoon of music and chat with Dame Evelyn Glennie in Eastbourne’s College Theatre. Beginning to lose her hearing at eight and deaf since the age of twelve this did not stand in the way of Glennie becoming one of the world’s most renowned percussionists. It was clear from our talking just how much her school environment played a pivotal part in this. This was not some generously-resourced specialist academy but a community school in Scotland. One where teachers happened to have a burning passion for nurturing creativity and one where something like a hearing impairment was not going to be a barrier to participating in the school orchestra. Glennie’s passion was nurtured and supported – indeed we had one of those people who played such a role in the audience for the event. Of course, being a full-time solo percussionist was not even a career that had previously existed but Glennie set about successfully inventing such a role for herself and remains an inspiration to many.

She memorably played at the 2012 Games and during the course of our chat she talked us through some of the creative process that led up to that performance, not to mention the excessive degree of secrecy that was required from those chosen to take part in Danny Boyle’s opening ceremony. She also revealed that there had previously been an approach to play at the Athens Olympics in 2004. However, a change in artistic direction led to the commission being dropped. She had just told the audience that no creative collaboration is a failure even if it doesn’t quite work out – it’s always a learning experience. What, I asked her, was the learning experience in this case? Was she able to re-apply some of her original ideas for the London Games a few years later? No, she told us. The learning was far more about dealing with bureaucracy and as a result of that, she asserted, she was better equipped for that when the London Games came along several years later.

Audience questions there were many. What did she think about percussion as a form of healing? Had she ever considered collaborating with a visual artist? Where does she keep her instruments? What advice did she have for young performers?

And, of course, we had some wonderful, rich and deeply fascinating demonstrations. An array of instruments filled the stage. We were given a wonderful performance on Glennie’s prized marimba, for example. However, one of the most unexpected demonstrations came courtesy of several children’s wind-up musical boxes gaffer taped together. Setting them off one by one the first couple sounded entirely as you would expect. Once four or five were all going off together the effect was something quite different – and spectacularly sinister. She also talked us through some of the commissions she’s been given for film and TV soundtracks and gave us a demonstration of the waterphone and the evocative sounds that can create.

We ended the afternoon with a real treat as Glennie performed a piece of music called ‘Halo’ on an instrument called the hang. This is a relatively new instrument – think two woks welded together to make a kind of flying saucer shape with a few dents in it.

The effect was quite mesmerising and gave us a spectacular finish to a fascinating and thought-provoking afternoon. Certainly, we all came away thinking more about how we listen and how our bodies react to sound.”