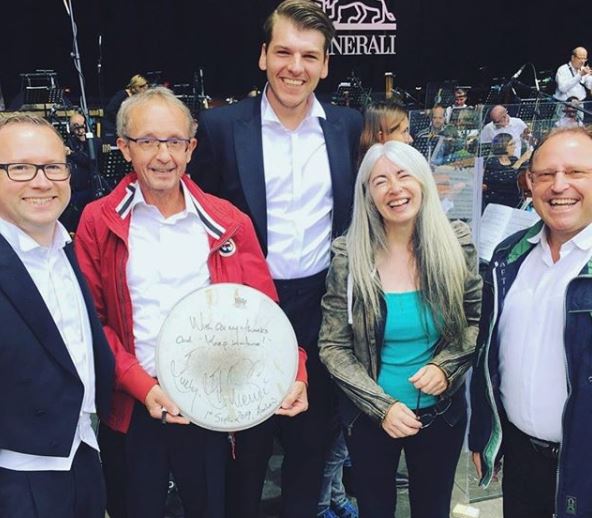 “Aachen. The silvery long hair falls like a veil over her face. Evelyn Glennie has gently knelt on the floor, picking up two chopsticks with the movements of an archaic priestess and stroking short tubes – krrrack, krrrrack. The sound is painful and unexpected, the audience listens. The British percussionist (54), ruler of about 1500 percussion instruments, showered with honorary doctorates, is star guest at the “Last Night” as part of the Kurpark Classix in Aachen.

General Music Director Christopher Ward greets the artist, a world class musician, with deep respect. Concentration is in demand with the conductor and orchestra, because the work “Der Gerettete Alberich” by Christopher Rouse, composed especially for Evelyn Glennie, has fierce pitfalls.

With the overture to Richard Wagner’s “Lohengrin” Ward had opened the round of epic sagas. The way from “Hagen”, a focal point of the new opera season in Aachen, to the dwarf Alberich and the unfortunate story of the “Ring des Nibelungen” is not far away.

Relaxed the musician who has only 20 percent of her hearing ability enters the stage. She feels sounds and vibrations through and through, acts as in a trance, highly musical and perfect. In short words she explains to the audience the dwarf’s path from rumblings to self-pity to astute malice. All this can be heard when playing timpani, drums, xylophone or marimba. The actions of the musician magically combine with the overall sound. The highest concentration prevails in the orchestra, which masters this complex contemporary composition with flying colours. Then Alberich is devastated, it creaks one last time. The applause is euphoric.”

This is a rough translation from German to English. Read the full review in German here