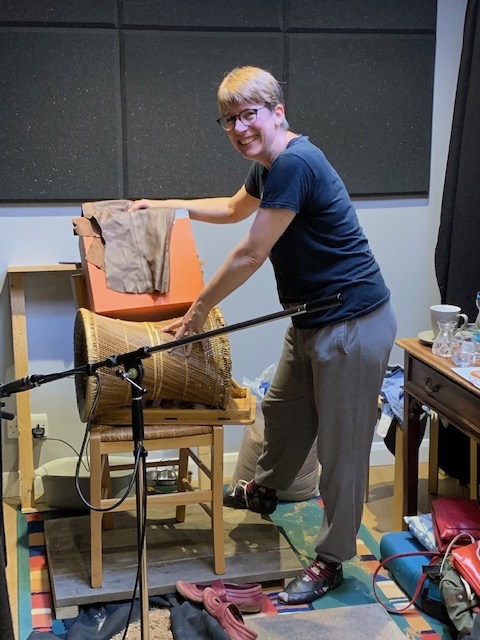 It was an absolute delight chatting with Dame Evelyn on her podcast recently! I think we could have gone on for hours… Hopefully we managed to explain a little of what I do as a Foley Artist – a career I had never heard of when I first took my tentative steps into the studio.

Foley is a rather niche bit of the post production process named after Jack Foley, who is credited as the first person to add sound effects to film. It involves recreating the sounds of all the action in a scene, recorded in a soundproofed studio, which can be anything from footsteps (literally walking in time with the actors); rustling leaves, mimicking the sound of trees in the breeze; banging a car door on the ground for the sound of a car rolling over; squelching melons and breaking celery for zombie invasions; swishing dresses in a costume drama; Mrs. Hughes’ keys in Downton Abbey…. You name it, I’ve probably made a sound for it. We work on the assumption that the location sound is unusable – maybe there’s an aeroplane flying overhead during a quiet scene or the knife used in a fight scene needs to sound like real steel, rather then a plastic prop – and therefore try to cover every possible detail in sound. It can be a little tedious when you’re working on your 50th cop drama but then you get some gems like Killing Eve or Bodyguard, which you can really get your teeth into.

About 10 years ago I was invited to take part in a research workshop with the director Katie Mitchell and since then I’ve been able to combine my theatrical experience with the Foley work, developing a way of performing live sound effects in the theatre. It’s led me to Cologne, Vienna and Berlin, Copenhagen (performing Foley for a production of Cabaret at the Opera House), consulting with the Birmingham Rep on a production of Edmond de Bergerac (teaching Freddy Fox and Josie Lawrence how to make battle sounds!) and I have a regular gig on Simon McBurney’s The Magic Flute, with a little sound booth set downstage alongside my favourite prop – a giant thunder sheet. I’ve performed in that production at the Coliseum in London, in Aix-en-Provence and in Amsterdam – it’s the show that goes on giving…!

Like everyone, I’ve had lots of projects and work cancelled over the past year. We just managed a dress rehearsal of all three plays in The Norman Conquests before lockdown was announced and I was due to be performing in The Magic Flute at the Met in New York at Christmas (fingers crossed that will happen at some point though) but I was fortunate enough to work on a production of Flute at Theatre Basel last Autumn. I was assistant to the director this time – a real promotion – and taught another performer my Foley part. We were just so lucky to do it although it was quite a surreal experience; we all had to wear masks in the theatre, even the singers, and the rules gradually became more restrictive as the days went on. We finally made it to the Premiére, which could only play to an invited audience of 50 in the 1000 seat auditorium. Strangely though, it felt like an honour and a privilege, for just two days later the law changed again and all performances were cancelled. It was, in its own way, rather magical.